The Coddling of the American Mind: How Good Intentions and Bad Ideas Are Setting Up a Generation for Failure por Jonathan Haidt,Greg Lukianoff 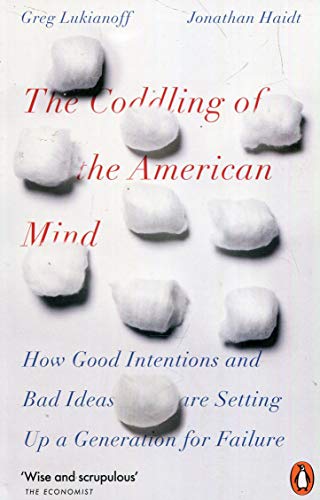 Críticas Excellent . . . their advice is sound . . . liberal parents, in particular, should read it (Edward Luce Financial Times)An important if disturbing book . . . Lukianoff and Haidt tell a plausible story (Niall Ferguson The Times)A compelling and timely argument against attitudes and practises that, however well-intended, are damaging our universities, harming our children and leaving an entire generation intellectually and emotionally ill-prepared for an ever-more fraught and complex world. A brave and necessary work. (Rabbi Lord Jonathan Sacks)No one is omniscient or infallible, so a willingness to evaluate new ideas is vital to understanding our world. Yet universities, which ought to be forums for open debate, are developing a reputation for dogmatism and intolerance. Haidt and Lukianoff, distinguished advocates of freedom of expression, offer a deep analysis of what's going wrong on campus, and how we can hold universities to their highest ideals. (Steven Pinker)Our behavior in society is not immune to the power of rational scientific analysis. Through that lens, prepare yourself for a candid look at the softening of America, and what we can do about it. (Neil deGrasse Tyson)We can talk ourselves into believing that some kinds of speech will shatter us, or we can talk ourselves out of that belief. The authors know the science. We are not as fragile as our self-appointed protectors suppose. Read this deeply informed book to become a more resilient soul in a more resilient democracy. (Philip E. Tetlock) Reseña del editor The New York Times bestsellerFinancial Times, TLS, Evening Standard, New Statesman Books of the Year'Excellent, their advice is sound . . . liberal parents, in particular, should read it' Financial TimesHave good intentions, over-parenting and the decline in unsupervised play led to the emergence of modern identity politics and hypersensitivity?In this book, free speech campaigner Greg Lukianoff and social psychologist Jonathan Haidt investigate a new cultural phenomenon of ""safetyism"", beginning on American college campuses in 2014 and spreading throughout academic institutions in the English-speaking world.Looking at the consequences of paranoid parenting, the increase in anxiety and depression amongst students and the rise of new ideas about justice, Lukianoff and Haidt argue that well-intended but misguided attempts to protect young people are damaging their development and mental health, the functioning of educational systems and even democracy itself. Ver Descripción del producto